What do you think of when you picture the image of cool Americana? Many different pieces of clothing throughout history have contributed to the Americana style, which can be defined as "things associated with the culture and history of America, especially the United States." When people think of the traditional or typical Americana style, there are often specific pieces and brands that come to mind.

Some of these fashion staples and brands include Levi's 501 jeans, the Oxford shirt by Ralph Lauren, Converse sneakers (especially the All-Star Chuck Taylor High Tops), Ray-Bans, the traditional white t-shirt by Hanes, duck boots by L.L. Bean, Levi's trucker jacket, and the Alpha Industries MA-1 Bomber jacket. There are other popular leather jacket types, of course, although that list does seem pretty all-inclusive, there is one piece missing that virtually defines the Americana style: the Schott Perfecto leather jacket, otherwise known as the Double Rider jacket.

What is the Double Rider?

The Double Rider jacket or Perfecto leather jacket is the ultimate biker jacket, symbolic of the "bad boy" style. This jacket has been a timeless piece since its creation in 1928. The biker jacket and style were invented by Irving Schott, a man who sold handmade leather products from door to door with his brother, Jack Schott. It was initially dubbed the Perfecto after a cigar by the same name. Harley Davidson was the first to retail the Double Rider jacket as an added offer along with the purchase of a motorcycle; this was one of the driving factors of the jacket's popularity among bikers.

Many key features define this historic and stylish biker jacket. Out of all of them, no one element is any more recognizable than the next, as they each work together to create one cohesive look. The identifiable features of the Double Rider jacket or Perfecto leather jacket are the epaulets, the belt, the asymmetrical zipper, its length, the coin flaps and zipper pockets, the chrome hardware, the sleeve zippers, and the signature leather material.

The epaulets - a decoration attached to the shoulders of a uniform - were inspired by military fashion and gave the biker jacket an authoritative vibe; they also function well as glove holders for bikers. For a short amount of time starting in the late 1940s, each epaulet was decorated with a chrome star. These chrome star decorations were discontinued shortly after, however, as people tended to rip them off the jackets in stores.

The belt's purpose was to close the waist of the jacket to protect its wearer from the wind. Initially, the belt came attached to the belt loops of the jacket; however, the attached belt was later removed with the release of the Perfecto 125. This was done to allow motorcycle cops to wear a gun holster with the jacket comfortably. Wealthy members of various motorcycle clubs also became fans of the Perfecto 125 due to the new ability to customize their biker jacket belts.

Although each feature of the Double Rider jacket or Perfecto biker jacket does work together to create one style, there is one feature that may be the most identifiable of them all. The jacket's asymmetrical zipper establishes the silhouette that everybody knows and loves. However, this biker jacket design was more functional than it was aesthetic. The asymmetrical zipper allows optimal movement while riding a motorcycle, and it also helps better protect the rider from harsh winds.

The length of the Double Rider jacket or Perfecto is another identifiable feature of this famous leather biker jacket. This jacket is shorter than you may be used to, but this style lined up with the style of men's clothing back in the day. When the leather jacket was first designed, men's pants were typically worn just above the waist, so the length of the Double Rider landed nicely at the top of most men's pants. The shorter length, compared to fashionable long coats of the era, also fit better with the needs of bikers.

The popular coin flaps and zipper pockets were not included in the original designs of the Double Rider jacket or Perfecto leather jacket. Originally, Irving Schott tried various types enclosed pockets to protect the belongings of bikers who were on the go, but he eventually settled on coin flaps and zipper pockets. Schott was also the first clothing designer to put a zipper on a jacket, making him a pioneer of history in more than just one way.

The chrome hardware that adorns the jacket was a popular commodity following the invention of the automobile. By the time the 1920s came along, chrome was utilized in many different things, from appliances to furniture and everywhere in between. The fact that Schott included chrome hardware in this fashion only further popularized the material trend.

The zippers added to the sleeves of the Double Rider jacket or Perfecto were another useful feature; although, the aesthetic appeal was a nice bonus, as well. The zippers helped bikers adjust the tightness around the wrist, which helped add more wind protection. Bikers adopted a favorite style from cowboys by zipping the wrists of the jacket and slipping them underneath their gloves.

Finally, one of the most essential features of the Double Rider jacket or Perfecto is the material itself. Although Schott was not the first to make a leather jacket, he was the first to invent the leather biker jacket. The history of the leather jacket traces back about a decade to German fighter pilots in World War I, worn as a protective outer layer and part of their military uniform. Irving Schott's leather jacket was inspired by the functional bomber silhouette of the German military uniform. 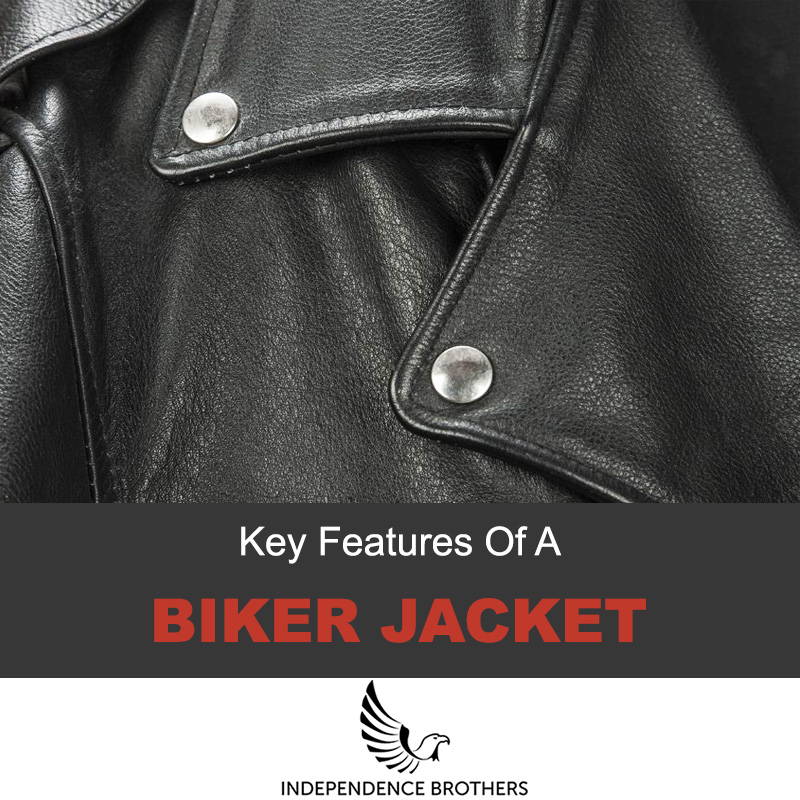 The Evolution of the Double Rider Over Time

It was only natural for the design of the Double Rider jacket or Perfecto to adapt and evolve as time passed. In the 1940s, Schott came out with several new versions of the Double Rider that quickly gained popularity. The Schott 618 was designed with an updated fit, and the Schott 613 included the addition of chrome star decorations on the epaulets of the original fit. The Schott company continued to cement its foundation and was later asked to design and provide wool pea coats for troops fighting overseas in World War II. Throughout the 1950s, the Double Rider jacket represented rock 'n' roll, race car driver, punk bands, and youth rebellion. No matter how much time passes, the traditional leather jacket always seems to represent the same thing.

The Double Rider's Popularity Through the Media

Although the Double Rider jacket or Perfecto may be a well-recognized and accepted piece of fashion now, it wasn't always so popular. The biker jacket was mostly a motorcycle staple until Hollywood significantly changed the general public's opinion on the style. In 1953, actor Marlon Brando starred in a movie called The Wild One, playing a "bad boy" biker king, Johnny Strabler. In the film, Johnny Strabler was often shown sporting a customized Schott Perfecto with his name embroidered in script on the right shoulder.

After Marlon Brando introduced the Perfecto to the silver screen, the leather jacket continued to grow in popularity on a grand scale. The media and society began to consistently associate the leather jacket, especially the Double Rider or Perfecto, with the ultimate symbol of cool rebellion, and the Perfecto became the official image of biker style.

The Double Rider and other leather jackets continued to be shown and popularized in Hollywood movies after Marlon Brando's role in The Wild One. In 1979, Joey Ramone wore a Schott Perfecto in Rock 'n' Roll High School and rekindled the jacket's popularity. Leather jackets, in general, continued to be worn by characters in popular movies; this includes Sergeant Oddball in Kelly's Heroes (1970), Bluto Blutarsky in Animal House (1978), Max Rockatansky in Mad Max (1979), Steve Burns in Cruising (1980), Indiana Jones in Raiders of the Lost Ark (1981), Maverick in Top Gun (1986), Tyler Durden in Fight Club (1999), Star-Lord in Guardians of the Galaxy (2014), and many more. 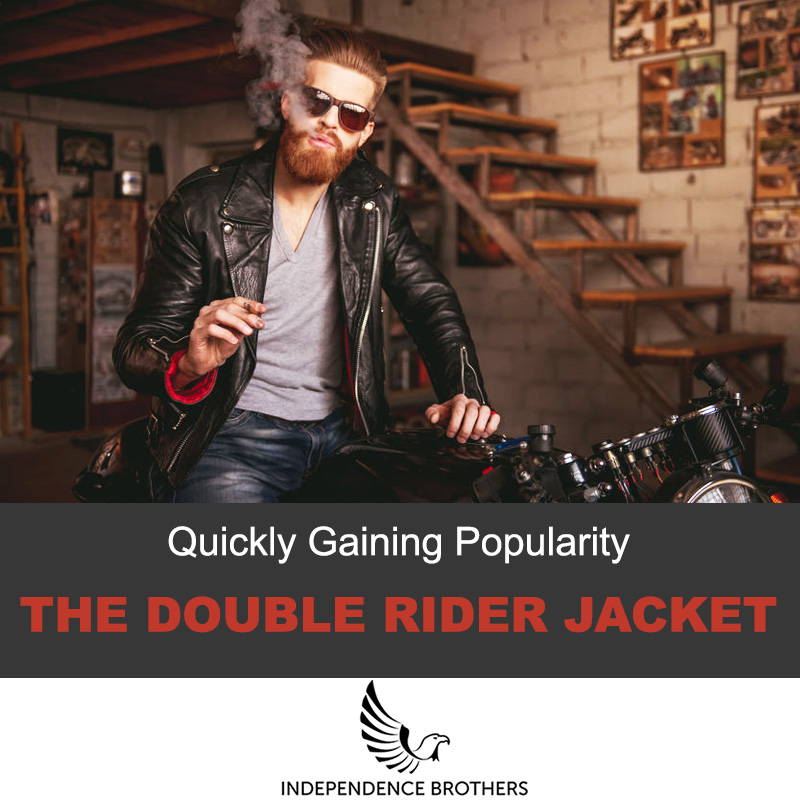 In the decades that followed, the popularity of the Double Rider leather jackets continued to stick and is still thriving today. Although Irving and Jack Schott have since passed, their company still lives on today after more than one hundred years. The third and fourth generations of the Schott family currently own Schott NYC and continue to manufacture many of their clothes and products inside the United States.

Today, the jacket is often worn as a symbol of much of the same ideas it began to represent in the 50s, 60s, and 70s. Many different fashion brands have designed jackets inspired by the Double Rider or Perfecto, and even Schott NYC themselves have cooperated with popular brands to further the style. For example, in 2011, they collaborated with Lady Gaga to create a signature jacket: the Schott NYC Men's Motorcycle Jacket, complete with spikes lining the shoulders. Schott and the Double Rider have stood the test of time and will most likely continue to be a popular choice for years or even decades to come.