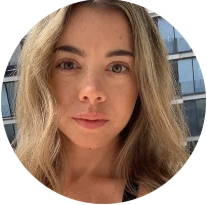 No other piece of clothing has the same style and class of a genuine leather jacket. A great jacket makes getting dressed easier and can quickly become a statement piece in anyone's wardrobe. Now, while you may want to invest in a genuine leather jacket how do you find the one for you? Not sure what is the difference between genuine and real leather? How about where genuine leather comes from? How much a leather jacket should cost and where to buy it? With so many different options out there choosing the right one can get overwhelming. Follow this easy guide to ensure you are getting the best jacket out there for you, and even learn a little history along the way.

What is genuine leather?

Once leather has been altered the top layer is then categorized into top grain, corrected grain, or genuine leather. With top grain being the highest and genuine leather being the lower grade. Something else to keep in mind while shopping is that genuine leather is somewhat of a catchall term for anything that is made from animal hide. This means you may not actually be getting cowhide if you don’t do your research before buying. Now, it’s legal for leather makers to use the hide of pigs, goats, etc. and label it as genuine leather. If you are still unsure about what you are getting at the store, check out these easy to follow steps below to not only check if leather is genuine but also learn how to spot good quality. 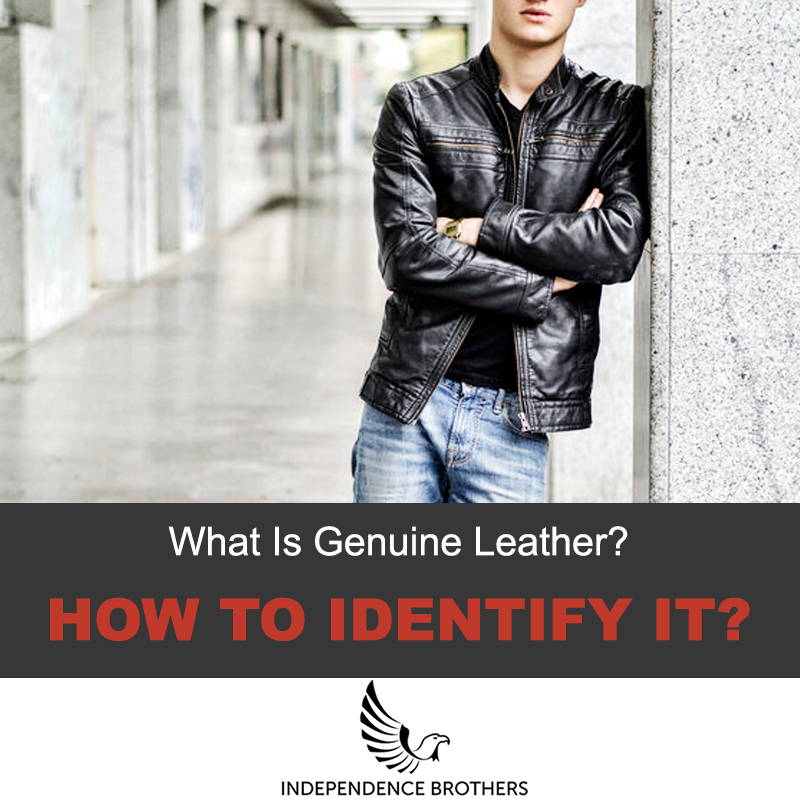 How to identify genuine leather?

Use these tips to check if your leather is genuine:

History of the leather jacket

Did you know that German fighter pilots wore the first leather jackets during World War I? The “bomber” silhouette they used to wear is now a staple in most leather jacket shops. So how did leather jackets get from military uniforms to the iconic pieces we still wear today?

In 1928, the very first motorcycle jacket was sold at a Harley Davidson store for $5.50, designed by Irving Schott, you may know this iconic piece as the “Perfecto.” The jacket took the world by storm when celebrities started sporting the “Perfecto.”

During WWII the A-2 leather flight jacket made its first appearance. Starting out as a military uniform, today the classic jacket is a staple in many men’s wardrobes around the globe.

The time where fashion was influenced heavily by anti-war protests and the biggest bands of the time. The Beatles were known for wearing black leather jackets on stage, and many followed suit.

Punk rock was at its peak during this time, showing the world all kinds of new leather jacket styles apart from the classics we have seen years prior. With chains, straps, colors and everything in between, it was a new era for the leather jacket.

It’s a girls’ world too now. Many women, including the top fashion models at the time, started sporting leather jackets to amp up their casual chic looks.

Today, the sky is the limit when it comes to leather jackets. Genuine leather has left its mark in history and will continue to be a front runner in fashion for years to come. 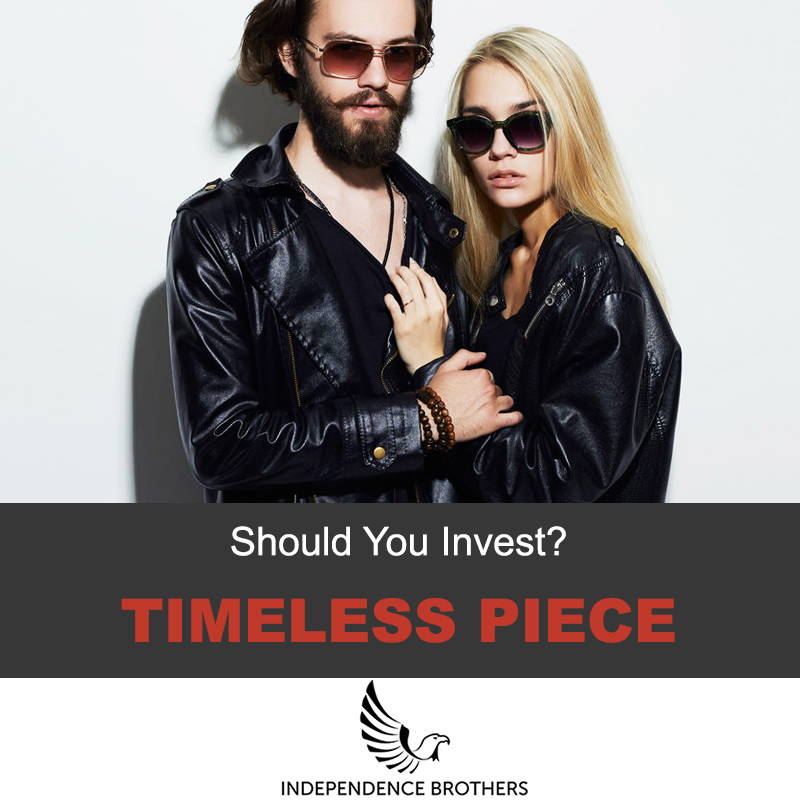 Should you invest in genuine leather?

Should you invest in a jacket which will be with you for years to come, be one of the most versatile pieces in your wardrobe, and add style and sophistication? In my opinion, the answer is yes. The great thing about genuine leather jackets is that your options are truly endless. From different styles to different price ranges there is a jacket out there for just about anyone.

How much is genuine leather?

The very general range for leather jackets is $200 to $2,000. If you are on a slightly smaller budget your dream jacket is still out there, you might just have to look a little harder. Your best bet is to not go below $300 retail value. In general, any genuine leather jacket under $300 may not be the best quality. That being said, searching through a sale rack is never a bad idea. Sales usually happen at big department stores such as Nordstrom and Macy’s every 3 or so months. Another tip is to shop at the end of a season for your jacket for next winter.

Another tip to keep in mind are the details which can make the price point go up. Small features such as the lining, whether or not it has pockets, and the quality of the hardware can make a significant difference in the price.

Remember, anything which has been made from animal hide is not going to be ultra cheap. A lot of labor and processing goes through making these pieces so it’s only natural the prices may be a bit high.

You might still be thinking, is it worth it to spend your hard earned dough on just a jacket? Let me tell you, it is. A good leather jacket is not something that you will wear once and throw to the back of your closet; this is a piece that will last you for years to come. 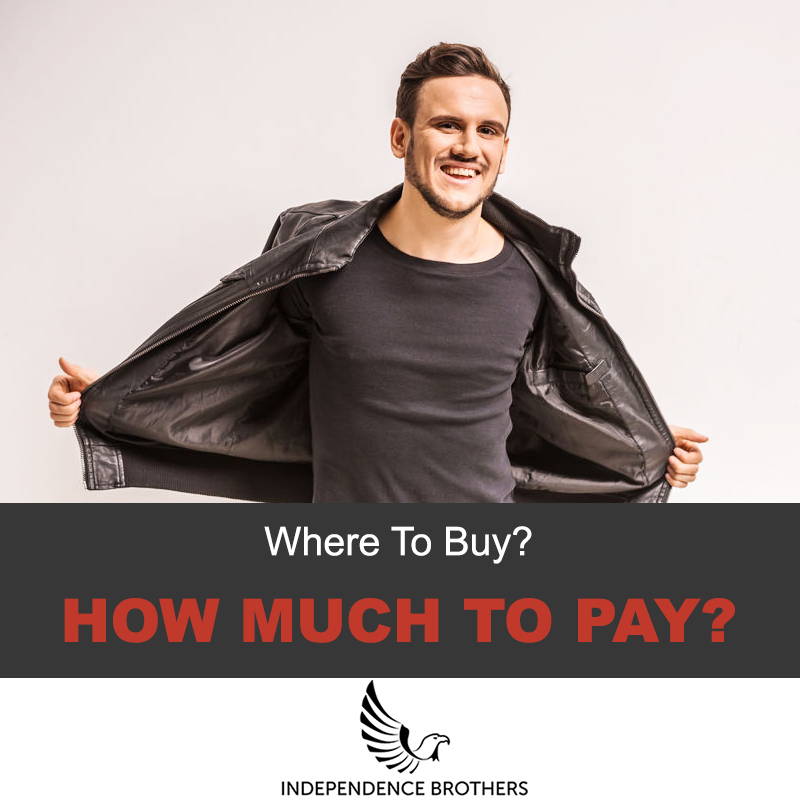 Are you ready to shop? I have created a list below of a few of my favorite stores to buy genuine leather. On this list, you will find a mix of luxury and affordable fashion. What’s important is that you have the tools and knowledge while purchasing a leather jacket in order to get the most for your money.

Wilsons Leather - Possibly one of the most well-known leather makers, Wilson’s has been producing high-quality genuine leather since 1899. They have over 60 styles of men’s jackets to choose from, and while their prices start a bit high, sales online and in-store happen frequently.

Hugo Boss - The German luxury fashion house commonly known as Boss offers some of the highest quality genuine leather jackets on the market. However, with an exceptional reputation and quality, comes a great price. Their jackets range from $700 and up.

Macy’s- I put Macy's on the list for a couple of reasons, one there is a Macy’s in almost every US mall and two they have one of the largest varieties of prices and styles to choose from. Macy’s is also famous for doing special sale events every couple of month, so if you are in the market for a pricier piece, I suggest waiting for one of their annual sales.

Hide Park - This UK based company prides itself on outstanding customer service while offering top-quality genuine leather at reasonable prices. Hide Park also has the largest selection of jackets to choose from on this list. 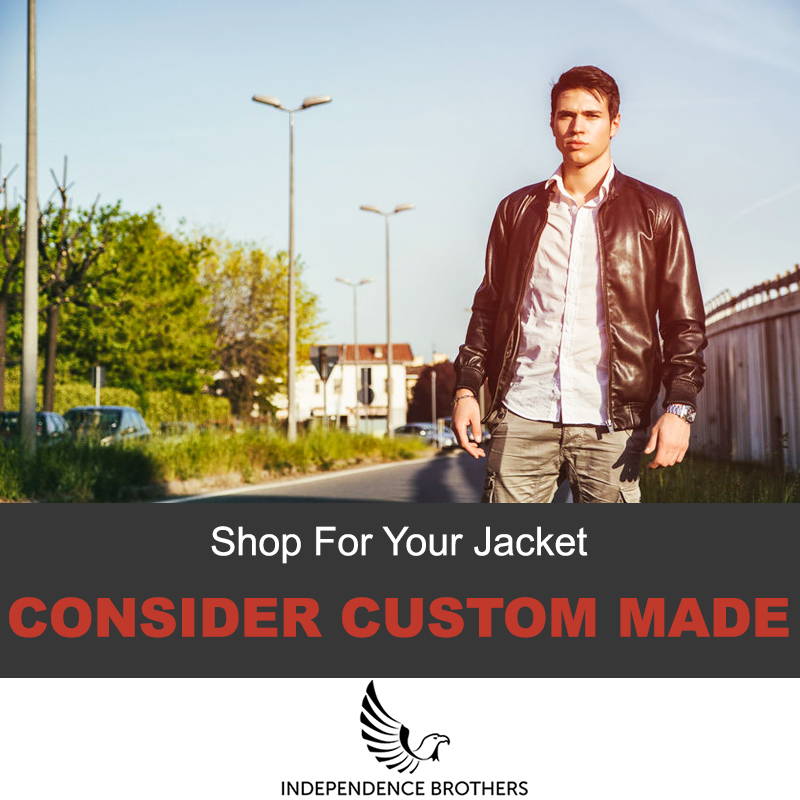 Should you have a leather jacket custom made?

If you are still on the hunt for your perfect jacket, let me suggest going custom. This route gives you the opportunity to create your dream jacket from scratch whether it is in store or online. Leather jacket retailers have been adding the option of ordering a custom-designed jacket in recent years, with the trend showing no signs of slowing down. So, why go custom? First of all, it’s guaranteed to fit you like a glove, by merely putting your measurements on the form which can all be done online in the comfort of your own home. Second, you get to choose the material and color of your new jacket, along with the lining color and material at most stores. Next, many retailers also offer unique customization ranging from having words, or your initials embroidered into the jacket, to some even offering extravagant designs and patchwork. Another perk to going custom is choosing the hardware color for the zippers and any buttons or grommets that may be on the jacket. Finally, from my experience getting a custom made leather jacket means top notch customer service. As long as you are working with a reputable company (don’t worry I listed some below), you can expect to have a rep on hand to help with any concerns or questions.

Independence Brothers- They use full grain leather (which is higher quality) at Independence Brothers. The company is owned and operated by two brothers, who specialize in solely custom-fitted leather jackets and have now made their mark in the custom design world. They offer unique custom leather jackets at reasonable prices with exceptional customer service. Every jacket made is unique to your particular fit for a very reasonable price.

The Jacket Maker - A group of young individuals started out in 2013 on a mission to change the way men and women wear outwear. As of 2017, the company put more focus on custom pieces, wanting to give customers the chance to get a custom jacket at a reasonable price.

Schott - The classic Americana leather jacket company also offers custom made pieces. While their prices are higher than the others on the list, they are famous for their top of line quality and service. I suggest buying a piece from them in advance of when you need it by as a jacket can take up to 10 weeks to produce. 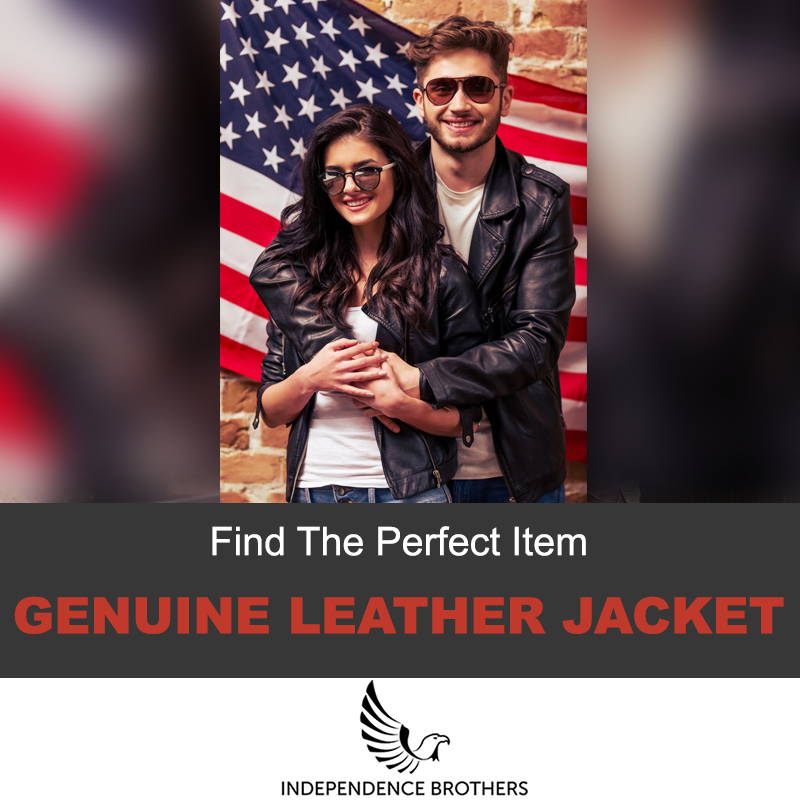 Thanks so much for reading! For me, this piece was necessary to write because I do think it can be intimidating walking into a store or even opening a new browser if you’re shopping online. With so many options, styles, colors, and prices to choose from I hope this guide gave you a little bit of guidance. Putting in a bit of time and effort while shopping will ensure you find the perfect jacket. A genuine leather jacket will be a piece of clothing that will be with you for years to come. We hope you enjoyed this article, learned something, and are ready to embark on your shopping journey. If you liked it, please leave us a comment below and share with friends and family.

I couldn’t leave you without a couple more tips and tricks! Check out these links below on how to style and care for your new jacket!

How to care for a leather jacket

Ways to style a leather jacket

Of course, if you are ready to get the best custom-fitted leather jacket for a reasonable price, then you can go check out Independence Brothers now.